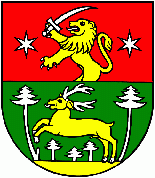 The modern coat of arms of Jelka, combining the crowned lion of ancient Joka with the hind of Ujhely Joka


The village of Jelka on the Csallokoz, the Rye Island formerly belonging to Bratislava County, played host to a staggering number of noble families, diverse in their origin and influence. The village, like quite a number in the Csallokoz and the Matyusfold, is very ancient and dates back to the Magyar conquest in the 9th and 10th centuries. Firstly it was an outpost of Magyar warriors, to guard the borders against the Dukes of Bohemia and Austria; then, in the early middle ages, it was a tributary to the castle of Bratislava - the village contained the castle warriors who had to fight in times of need. These origins explain, as with other villages in the area, the relatively high proportion of nobility. Jelka's oldest aristocratic family, the Ilkays (documented since the 12th century), divided to create the noble Farkas, Panghy and Nagy families, who survived until modern times.

Jelka was at the forefront of Hungary's historical events. On the border of the Turkish empire in the 16th and 17th centuries, it was razed several times and bloody fights occurred within its borders. In the 18th century, during Prince Ferencz Rakoczi's noble rebellion against the Habsburgs, his field marshal, Count Bercsenyi, was said to regularly hold conferences with his officers under an ancient tree in Jelka.

The following is a list of the noble families who lived in Jelka in the 19th centuries. Many names are of ancient date, some are new, and others of old families from elsewhere who have moved to Jelka. In fact most of those families present are originally from elsewhere in the county or indeed the kingdom - it would point to marriage settlement and the attraction of the village in the wealthy part of the kingdom, near the capital of Hungary, Pressburg (Bratislava). The large number of names is due to several factors:

1) the sheer size of Jelka. The village is formed of originally three independent municipalities, called Nagy Joka, Kis Joka, and Ujhely Joka. Jelka is therefore one of the largest villages in the area.

2) Many families, otherwise ignoble, had members who were documented as being noble, for whatever reason, sometimes only once or twice. Nevertheless, it does seem that around half of the entire population of Jelka was noble. Several illustrious figures rose from the original Jelka nobility, such as the military officers from the Farkas de Joka family and the Counts Takacs de Kis Joka (both Caspar Farkas and Franciscus Takacs, for instance, were viscounts of Bratislava in succession in the mid-18th century: and they were preceded by Sigismundus Szullo in 1743). Likewise, ancient families from other villages such as the Hegyi and the Csefalvay are recorded in Jelka, as well as the Fekete de Galantha family - several branches of this family were baronial, and one branch was comital (from this family comes the legendary 18th century courtier Count Georg Fekete de Galantha, knight of the Order of the Golden Fleece).

The Nobility of Jelka