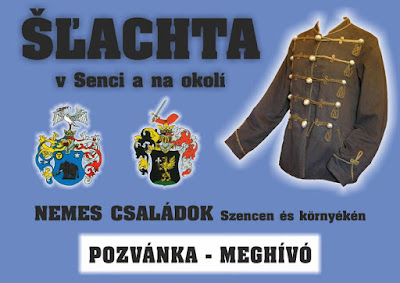 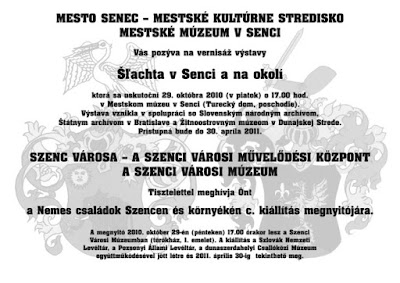 The city museum of Senec is hosting an exhibition until 30 April 2011, entitled "Nobility in Senec and Surrounding Countryside". The poster and the invites are to the left: the coats of arms of those of the Klebercz and the Czikhardt families.

An interesting show, it managed to convey the broad sense of local noble families, despite clearly being on a very tight budget. Apart from a wealth of text and coats of arms, real life paraphernalia was also included, such as sabres, tunics, and jewellery of the typical Hungarian nobleman.

Especially interesting were two collections of manuscripts. One, the archive of the family Karacsony (Karatsonyi, Karacsony) de Hodoss, a very ancient family which traces its origins to the 13th century. It lived in Reca since the end of the middle ages. Also of note was part of the archive of the Doka de Rethe family, which contained facsimiles of its grant of arms/nobility and other documents.

The city museum in Senec, though of recent vintage, is a great success. Housed in the "Turkish House", a fortified Renaissance manor house in the centre of the town, it has a permanent exhibition which is very comprehensive. A section of it is dedicated to Albert Szenczi Molnar, the great Hungarian Humanist and Protestant scholar in the 17th century. As his name suggests, Molnar was born in Senec.
Posted by Imrich Nagy at 03:19