The Extinction of the Elefanthy 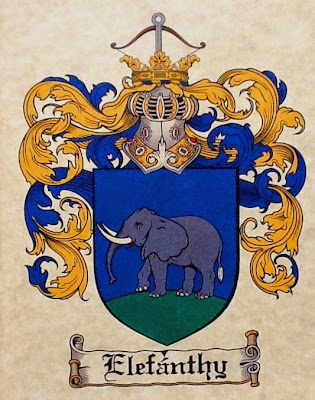 This website was begun with an article about the genealogical relations between the Klebercz and the Elefanthy families; in those inexperienced days I also placed the title of the essay to be the url of the website – which it remains to this day. You can read this essay here. And for additional heraldic material, here.

A more recent study of the Nitra county nobility published the discovery that a line thought to be extinct in the 15th century survived until at least the 17th – but the historian’s researches ended there.

All the published genealogical sources maintained that this family died out – so my shock and surprise was great when, after a relatively simple search through parish records, it became clear that the noble Elefanthy survived in their ancient seat until at least the late 19th century. What is doubly shocking is that a noble family of this exceptional standing can be so easily ‘forgotten’, and attests to the pitfalls of relying on the writings of professional historians, who with a single stroke of the pen often write out the fates of living individuals.

I traced intermittently the Elefanthy in Nitra from the 18th century, but since the records are difficult to read I will not reproduce them here. Instead, I will pick up from the early 19th century – where I managed to reconstruct a family tree of the Elefanthy of Elefant from 1815 to 1875.

Francis Elefanti, a military captain, baptized his son George in Stropkov in 1815. He is certainly the Ferenc Elefanty who wrote a book entitled "Hungary in 1848" (published in Budapest in 1848), recollecting events during those revolutionary days. Because of his involvement in the Revolution, he emigrated to London, where he was private tutor to his distant kinsman Alexander Apponyi, later famous for donating his exceptional library to the Hungarian nation. I assume that Francis may be the brother of Martin Elefanthy; his line were noble landowners in Preselany (Pereszleny), an estate adjacent to the villages of Upper and Lower Elefanth, the medieval cradle of this family. It is worth noting, however, that Preselany was a royal donation to the Elefanthy family in as early as the 13th century, along with many other estates in Bratislava county.

Martin had a son, Anthony, born in 1828, and a daughter, Emilia, born in 1836. This Emilia was in fact baptized in the church of Upper Elefanth, where the family was living at the time, or perhaps went to baptize their child in their old former lands. Emilia later married Joseph Ray, a nobleman, lawyer and later judge in Nitra county.

The brother, Anthony, married Aloysia Gregory and in 1848 baptised their first child, Etelka, again in the parish church of Preselany. The family then moved to Trnava (Nagyszombat), an old free city in Bratislava county, and in 1850 had a son, Alfred.

Etelka seems to have had an interesting life, for in 1875 she gave birth to an illegitimate child, baptized Mary. Their uncle and aunt Joseph Ray and Emilia Elephanty were the godparents.

It should be mentioned also that the family members are all identified as ‘noble’, living in or near the old estates, and having as godparents the most illustrious and wealthy nobles of the county (Jezerniczky, Majthenyi, Ocskay, etc). The Jezerniczky, out of interest, actually owned the Elefanthy family castle in Lefantovce for quite some time in the 19th century. Both Anthony and Martin Elefanthy of Pereszleny are on a 1847 register of the nobility of Nyitra County. So the idea of some ‘fraudulent’ Elefantys is out of the question. It also accords with the otherwise paradoxical existence of Alexander Elefanthy of Elefanth (1822 - 1896) (szentjanosi es elefanti Elefanthy Sandor), who held the important post of mayor of Jaszbereny in the late 19th century. Official biographies all confirm his descent from the noble Elefanthy, a branch of which came from Nitra to Jasz county in the 18th century.

On the basis of the research, a small family tree of this branch can be reconstructed: 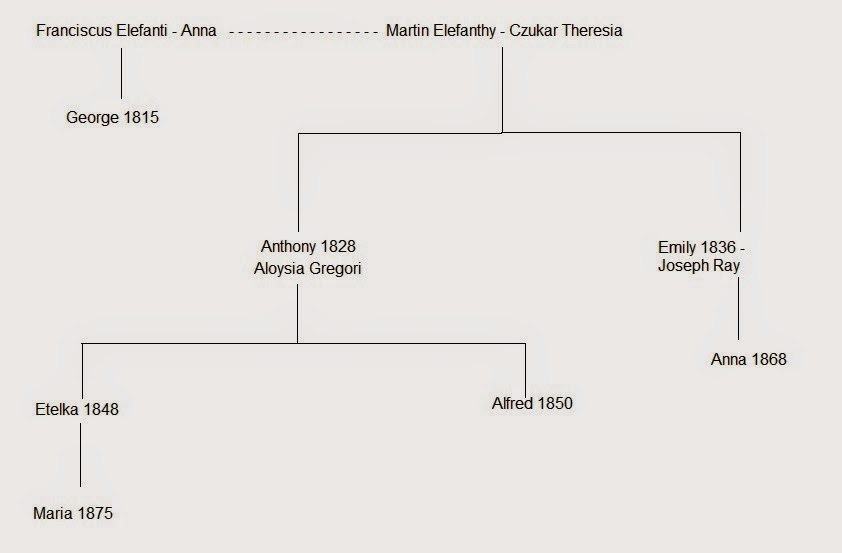 The Elefanthy can also be traced to Bratislava county, in the 17th and 18th centuries. For instance, in 1679 in Trnava again Ladislas Szegedy, a local nobleman, was the husband of Elizabeth Elephanty. As a matter of fact, that same page in the parish record mentions Andrew Klebercz, who was married to Elizabeth Maylath. This is rather a coincidence but does furnish proof of their close ties.

During the end of the 17th and beginning of the 18th centuries, Tomasov (Fel), a village in the Senec district and thus adjacent to the Klebercz properties, a Catharina Elefanty lived with her husband Michael Ravasz and had several children. The Ravasz were also local landowning nobility living in Fel.

All this demonstrates that, in today’s world, private research often yields unexpected results and unearth surprising discoveries. Hopefully this could be an example to many private genealogists worldwide.
Posted by Imrich Nagy at 10:25