The Origins of Bratislava County Nobility

﻿The Origins of Bratislava County Nobility 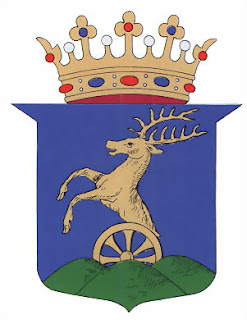 The arms of Bratislava County (Pressburg, Pozsony) - the blazon originates in the arms of the Palffy de Erdod family, who were hereditary Counts (Ispan) from the 17th century until the 20th.
﻿The counties of the Kingdom of Hungary were very different from what a person today would think of as a “county” in relation to Central Europe; i.e. a relatively small area owned or controlled by one family on the hereditary principle. Hungarian counties were, on the contrary, the main system of administration and separation of the realm since the formation of the Hungarian state in the 10th century. Theories proliferate on whether the county system was taken from the Slavs of Greater Moravia, or whether the system was inspired by the Bavarian early feudal system. Hungarian counties were large in terms of territory and semi-independent in terms of governance, and in the absence of exact comparisons, they were close to the small principalities of the Holy Roman Empire.

In the very beginning of the Hungarian kingdom, during the reign of St Stephen (1000 – 1038), counties were created to make it easier for the vast conquered territory to be run. Much of the land, in fact, was owned by the king, as all previous forms of ownership and governance were swept away under the invading Magyars. As such, St Stephen set major castles and power structures as the cores of the counties (comitats), which would be the administrative centres for his benefit. However, during the middle ages a gradual shift occurred within the counties, and around the 13th century they ceased to be royal comitats run purely for the benefit of the king, but noble counties, run semi-autonomously by the local nobility.

Bratislava county was one of the oldest and most important in Hungary. It can be assumed that it existed from as early as the 10th century, or at least on the cusp of the 11th century. It was important for a number of reasons. Its geo-political location was crucial to the safety and well-being of the nascent kingdom. It controlled the mouths of the Danube and Morava rivers, and it bordered two of the most dangerous powerful and belligerent principalities – the Austrians and the Bohemians. Later of course, from the 16th century, its proximity to the Imperial capital of Vienna and the fact that Bratislava (the city of Pozsony, Pressburg) was the capital of Hungary for centuries meant that the county became the wealthiest and most prestigious in the kingdom.

The singular importance of Bratislava county meant an unusual development of itself and its nobility. The area of the county in the 11th centuries was filled with Magyar warriors to serve as defence as well as offence for Hungary. To this day, names of villages and geographical locations in the historical region of Bratislava county point to the presence of warriors from all the original Magyar tribes: Nyek, Megyer, Kurth, Gyarmath, Keszi, Jeno, Tarjan, and Ker. Understandably, due to the nature of their previous lives, all these people had no strong connection to land ownership. The entire territory of the county was ‘nationalised’ ,owned by the king, and royal servants and castle warriors were allowed to occupy and use the land in return for their services. It is difficult if not impossible to characterise this elite class as a classic hereditary nobility – their status was conditional upon their work (albeit that the status of a noble in Hungary until the 19th century was conditional upon performance of military service).

During the 12th and 13th centuries, this very numerous top class of royal and castle servitors morphed into a hereditary landowning nobility, whose rights as nobiles was not totally conditional on their services, and as such they owned their land outright, which in the past was only leased to their warrior ancestors. This nobility lived mostly in the Csallokoz, the southern part of Bratislava county, and were a major force in the emancipation of the county from being a royal fiefdom to becoming a semi-independent administrative unit. The medieval history of Bratislava county is testament to the political power of its nobility.

Apart from this class of numerous Magyar warriors who developed into the middle and lower landowning nobility, the end of the 13th century gave risen to genuine aristocratic dynasties , who owned much of their land in the northern part of the county and thus were able to become great landowners. These include the descendants of Hont and Pazmany (Hunt and Poznan), the two great companions of St Stephen. These descendants became the Counts of St Georg and Bosing, and lords of Eberhard. The Elefanthy were another great landowner by the 13th century, as was the dynasty of genus Salomon.

These Magyar noble families from the Csallokoz formed the core of the medieval county nobility. The greatest families of the Empire, the Esterhazys and the Palffys, both rose from relatively obscure lower nobility of the Bratislava Csallokoz in the 16th and 17th centuries. In time, however, this nobility was augmented by later ennoblements of the original county population, mostly in the 17th century in thanks of wars against the Ottomans. Another important contributory factor were migrations: in particular, the displacement of Croat and Hungarian nobles from their original estates which were looted and taken by the Turks.