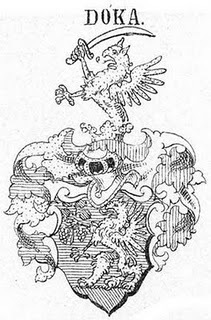 
Hungary never had authentic feudalism: all nobles were legally the same distance away from the king. More importantly, it seems that the ancient nomadic ways of the Magyar nobles made land relatively unimportant to them. Only with the early Arpads did the dividing of the kingdom begin. However, the Hungarian laws of inheritance (which again seems a relic of the nomadic way of life) insisted on dividing a man’s possessions equally amongst all his children. A Hungarian noble, then, upon death, had his estate fragmented.


Indeed, the earliest documents we have of noble families, from the 13th and 14th centuries, for the most part describe conflicts and family feuds over inheritance. The breaking-up of Hungary, then, begun as early as the 13th century. The process continued largely unabated until the 20th century, ruining the nobility with the weight of bureaucracy and administration.


The man who really changed the family’s fortunes was Michael Doka, living at the end of the 18th and first half of the 19thcenturies. His two marriages, lucrative county posts and intelligent purchases of property he added to the family landholdings portions of Reca, Csataj, Opoj, Dudvah, Bustelek, Horne Janiky, Puste Ulany (Puszta Fodemes), Jelka (Joka), as well as the domains of Borsaiz and Csandal. This became the very respectable estates from which all the subsequent generations of the Doka profited.


After the collapse of Austria-Hungary and the creation of Czechoslovakia, the state confiscated the Doka’s Reca estate, because in terms of size it qualified as a ‘velkostatok’ - that is, a large estate usually owned by the aristocracy. However, the estate was returned in 1925, only to be confiscated once and for all after World War II.