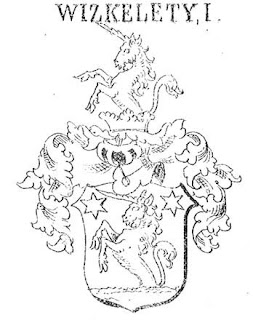 The Vizkelethy de Ilka (Joka in more modern parlance) was a famous, now long-extinct family. Its origins lie in the village of Jelka, and they descend from the original medieval families which owned Jelka. However, in the middle ages the family moved to Vizkelet, a small village near Galanta, and so since then they have been known as the Vizkelethy of Jelka.

Already in the 16th century the family received no less than two confirmations of nobility. But this was only the start of their successes. The three Vizkelethy brothers in the 16th century, George, James, and Thomas, became very powerful individuals. George was the private secretary of the Prince of Transylvania, Stephen Dobo, the famous warlord. His brother James Vizkelethy became the vice-palatine of the Kingdom of Hungary in the late 16th century. The last brother Thomas (1544, died 1611 in Bratislava), was in important officer and later the representative of the Hungarian government. He also became Lord Chief Justice and vice-palatine of Hungary. His greatest achievement was that fact that in 1608 Rudolf II raised Thomas Vizkelethy and his family to the baronate. This made his family one of only a handful of hereditary Barons in Hungary in the 16th and early 17th centuries; the practice of raising Hungarian nobles to the baronate and counthood became relatively common only much later.

Thomas's son, Michael (1579, died 1648), was also vice-palatine of Hungary. With him died out the baronial line of the Vizkelethys.