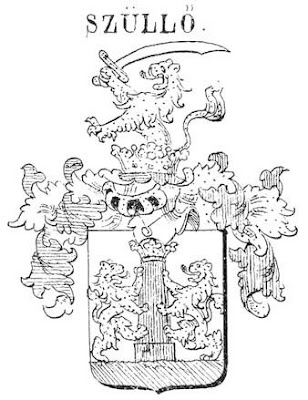 
The Szullos were a truly ancient and great family of Bratislava County. They trace their genealogy to the genus Salomon, a legendary genus of original Hungarian chieftains. The genus originates in the Csallokoz (the southern part of Bratislava County), and some other families traced their descent from it - such as the extinct Illeshazy de Illeshaza family, as well as the Eszterhazy de Galantha.

One branch of the Salomons became the lords of Borsa, a village in the Matyusfold near the town of Senec. In 1238 the lords of Borsa were confirmed in their land holdings by King Bela IV of Hungary. In 1278 the lords of Borsa took fighting part in the Battle on the Marchfeld, a decisive event in the history of Central Europe where the arrogant and powerful Premysl Ottakar II, King of Bohemia and Duke of Austria (also called the "Golden King") was decisively beaten by Rudolph I of Habsburg in alliance with King Ladislaus IV of Hungary. Seeing that this battle facilitated the rise of the Habsburg family in the region (who then became Dukes of Austria), it is ironic that in modern times members of the Szullo family took such an active part in anti-Habsburg rebellion (see below).

The most illustrious member of this family in the middle ages was Thomas of Borsa (Csorba), who was Royal Cup-Bearer and courtier to King Matthias Corvinus. As such, he was one of the small circle of the medieval barones et magnates, the most important individuals in the medieval Kingdom of Hungary. In the 16th century, the family of the lords of Borsa divides into three branches, forming the modern Szullo, Farkas, Csorba and Petheo families.

In 1678 Ferencz Szullo de Borsa, who was already a commander of a cavalry regiment, was elevated to Supreme Captain of the Csallokoz. Another member, Georg, was killed in the Battle of Parkany in 1683, fighting alongside members of the Prikkel de Rethe family (see below).

In the 18th century, Sigismundus Szullo was alispan (viscount) of Bratislava, and he was also the County delegate to the Royal Diet. His marriage to Baroness Maria Rzihovsky cause him to move and settle in Thurocz County.

The family was also involved in the momentous events of the Hungarian anti-Habsburg revolution of 1848. Istvan Szullo of Nagy Abony, judex nobilium, was a honved with the rank of first lieutenant. Geysa Szullo was a commander of a hussar regiment, and later in the 19th century he was a member of the Hungarian Diet (Parliament). Another Gejza was Imperial chamberlain and a member of the Hungarian parliament from 1901 to 1918. After the partition of Hungary, he became chairman of the Hungarian Christian Socialist Party in Czechoslovakia, which vigorously defended the rights of the Magyar minority. He was a famous and respected leader, who resigned in 1932 and who instituted Janos Esterhazy as his succesor as chairman. (Esterhazy was very well known as a somewhat controversial politician in Slovakia, but often portrayed as a hero by Hungarians).

Many members of the Szullo families lived in villages around Borsa in the 19th century, such as Jelka and Reca. Until the 20th century, the family were the greatest landowners in Borsa and Hegysur (todays Hruby Sur).